Mission - CPAA Founded in 1991 as a nonprofit organization, CPAA's mission is to introduce Chinese culture as an integral part of the American society; to promote multi-culture through collaborations; and to promote global culture exchange through international cultural events.

Creating new works - Since founding, CPAA has produced and presented high quality performances which world premiered at least one new work every year in its annual major events. The memorable productions including Sorrow of the Great Wall, Home of the Rainbow, New Dream of the Butterfly, Silk Road Fantasy and many others, have received rave reviews from the critics and praises from the audience. We consider creating new works is the top priority of CPAA's artists. These vibrant productions have established CPAA a highly acclaimed art institute in California. Since 2003, CPAA's flagship production Dances of China - A Journey of 5,000 Years that was comprised of many CPAA's new creations was on national tour and established CPAA's name at a national level. 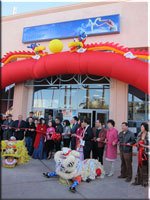 In 2003, CPAA started a dance school to provide job opportunities to its resident artists in Cupertino. In 2007, CPAA moved its headquarters to a 14,000 sq. ft. facility in West San Jose. Since then, CPAA has invested $300,000 in this spacious facility to establish a multi-function art institute including 3 main operations: